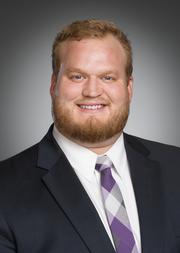 Tyler Munson joined CMM Realty in July 2012 after attending Utah State University where he was a student-athlete on the golf team while majoring in Business Administration. Over the past couple years, Tyler has played a crucial role in the implementation of new and innovative marketing ideas and website design. He has demonstrated to our clients that performance is a key principle and value of his business relationships, and they have appreciated his commitment to excellence.

Back to our team

Tyler did an excellent job helping me with my home search and purchase. He was communicative, provided great information, was able to negotiate on several key issues, and had excellent knowledge of the area. He helped facilitate all the key details as I was moving from the Midwest to Columbia, SC and his assistance and expertise made the transition very smooth. I’d highly recommend Tyler and would certainly use him again if I purchase another home.

Tyler worked diligently to help us not only find a new home but to get THIS home. While we looked around he was in contact with the other realtor and that evening our offer had been accepted. This after we have been dealing with a crazy market of homes go up and are sold right away. This house is EXACTLY what we have been looking for and are so grateful for Tyler and his work ethics to make it happen for us.

My wife and I are first time homebuyers. We contacted a few agents in the area when we were living out of state and none of them took us seriously EXCEPT Tyler. He took time out of his schedule to meet with us on a Friday in June 2020. We didn’t feel pressured or obligated to buy anything at all during the process. We wanted to purchase a home in a great school district and with Tyler’s expert knowledge of his area of responsibility he DELIVERED! Not only did we get a great school district, we got our dream home. I highly recommend Tyler Munson for your real estate needs.

Making the decision to sell our home/farm was a difficult one. We had worked hard to make our home a special place where not only our children and grandchildren would love to come but extended family and friends as well. Life threw us a curve when one of us became ill and we could no longer maintain our “farm”, thus began the arduous task of finding a realtor who would see the true value of our property. Our intent was to interview several. We knew it was going to take someone special to find the right buyer, it wasn’t long after meeting Tyler we knew it was a great fit for our family. Tyler saw all the unique things about our place that would make it stand out, he was always positive and assured us he would be able to sell our home. Tyler was always available to us when we had concerns. He took the time to show potential buyers the many features related to our farm. Tyler has a great personality and we feel a man of integrity. The sale of our 45 acre farm was going to require a specialized agent who was going to be creative with his marketing plan. We received all these things with our realtor and now friend Tyler Munson.

Tyler supported my family through a recent relocation, his knowledge of the local market helped to facilitate a smooth transition. As the work unfolded, it became very apparent that Tyler has a very strong network of local resources to conduct inspections as well as recommendations to support the closing, etc. He has very strong negotiation skills, working behind the scenes to generate the best possible outcome. Tyler was used as my think partner through the experience, 100% focused are listening and actively providing feedback on the next steps. So pleased with his support and making me feel as though I was his only client. Thank you!

We have had a great experience working with Tyler Munson. He has a lifelong knowledge of the area and what South Carolina has to offer. We have lived around the country and recently relocated from New York. Tyler worked hard to make it an easy transition and always had our best interest as his first priority. He not only looked for houses, but even sent us recommendations on schools and sport programs for our kids. When we decided to build our dream home, he helped us find the best location for a short work commute and negotiated to include some awesome upgrades. He kept open communication between us and the builders, so we were always a part of the process. Buying or building can be stressful, but Tyler’s professional experience made our move seamless. I can’t recommend him enough!

My husband and I thoroughly enjoyed working with Tyler Munson. We met him by inquiring about a property his firm had listed. Tyler was so very nice, professional, and accommodating from our first meeting. He showed us several properties after viewing the initial one, and we were fortunate enough to purchase the third property we viewed with Tyler the day we met him. We only engaged in minor negotiations in buying our property, but Tyler never once hesitated in communication and follow through during our process. When we closed, Tyler had everything in place from the realtor side, and everything went smoothly. Tyler also sold our existing property (that we definitely needed to sell quickly) within three weeks of our new home purchase closing. Those negotiations were also handled beautifully by Tyler. I recommend him to all of my peers and colleagues- he is an awesome agent. My husband and I were very, very pleased in working with Tyler, and we will certainly contact him first should we be in the position to purchase property again.

Our realtor, Tyler Munson, was exceptional! He sets himself apart from other realtors with outstanding interpersonal skills and by developing a strategic selling plan customized specifically for your property. He sold our home in just 3 days! The Munson name carries with it a tradition of trust. Whether selling or buying, you can place your confidence in Tyler Munson to get the job done!

I moved my family over 13 times in my Army Career. I can say Tyler has and was the best Realtor we have ever used. Tyler sold our home and helped us buy our dream home. His knowledge of the area and ability to be aggressive to represent you while getting you the best deal is hands down compared to anyone I ever seen. Great follow up skills and very prompt in getting you answers to your questions. You want to pick a Winner and sell your home and or find you your dream home you need Tyler. From my family to yours. Thank You Tyler!

Warning: Honest review. When we met Tyler Munson, we were in a dark place. I was about to lose my dream job and, as we had seen the writing on the wall, were in the process of selling our dream home. We had been trying to sell the house for three weeks and no one was interested in even looking at it. We were fed up with our previous selling agent for over-promising / under-delivering and had just cut ties with our buying agent (I won’t go into details here, but let’s just say he yelled at our kids twice). We decided to consider looking at a totally different area of the state just to get away from the situation and went to look at a beautiful historical home in Camden, SC. That’s how we found Tyler through Zillow.

Tyler showed us three homes that evening and was thoroughly familiar with the area. Even though we had only known him for a few hours, we instantly felt a connection with him and signed him as our buying agent that evening. Two days later when we’d had enough of our selling agent’s false promises and fired her, we took a chance and signed Tyler as our selling agent too. Best decision ever! In less than 24 hours, we were back on the market and scheduled open houses for that weekend. It happened so quickly that the one person who was interested in our house (and eventually bought it) never realized we’d gone off the market and back on the market! Interestingly enough, we almost lost that buyer due to our previous agent’s shenanigans, but Tyler was able to save and close the deal! While this was going on, Tyler worked tirelessly to find us a house to buy.

I can honestly say that I’m not sure how many properties we discussed with him online, but we submitted multiple contracts with him before we finally settled on “the one”. Tyler had our back every step of the way! I honestly don’t know when the man slept, if he even did. This is the fourth house I’ve bought and Tyler is the 8th real estate agent I’ve worked with. He is the only one I will ever work with again!